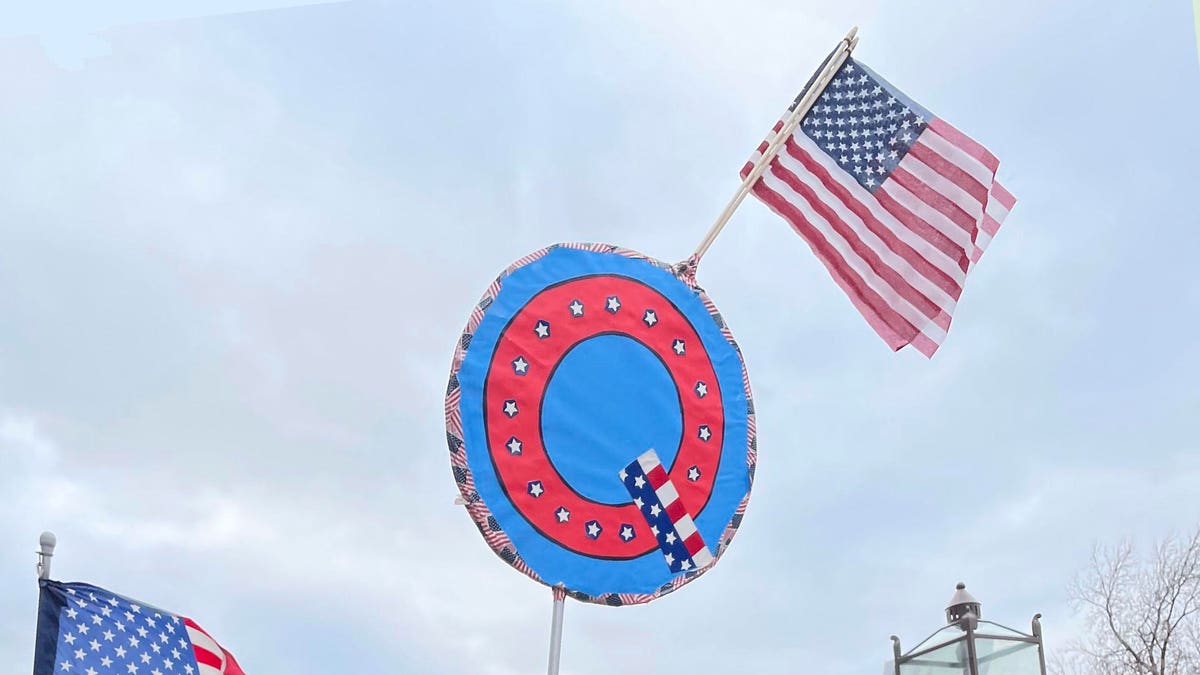 A Michigan state lawmaker was spotted Tuesday wearing a button that prominently featured the letter "Q" while she attended a rally outside the state capitol questioning the legitimacy of the 2020 presidential election, according to The Detroit News —a rally former President Donald Trump endorsed despite no evidence of widespread fraud.

The letter Q and American flags are seen in Washington on January 6, 2021.

State Rep. Daire Rendon (R) wore a button featuring a gold Q and an American flag, telling the newspaper she was wearing it to somehow reference a high-level security clearance within the Department of Energy—“That’s what it is,” she said.

She reportedly denied that it was in reference to QAnon, an internet conspiracy theory that claims Trump was robbed of the 2020 presidential election and had his agenda stymied while in office by a cabal of Satanic pedophiles who also run the Democratic Party.

Rendon did not respond to a request for comment from Forbes to clarify the meaning of the button.

Tuesday's rally reportedly drew a crowd of up to 400 people—well above the 100 originally expected.

Trump promoted the event last week, saying in a statement on Friday that attendees of the "Big Michigan Rally" would "demand a Forensic Audit of the 2020 Presidential Election Scam."

Michigan conducted more than 250 audits of election results at the state and local levels in the months following President Joe Biden's win. The audits affirmed Biden's victory in the state, which was by more than 150,000 votes. On Monday, Michigan’s attorney general and secretary of state announced charges against three people accused of voter fraud in the 2020 election, but Secretary of State Jocelyn Benson said the charges only show that “in the rare circumstances when fraud occurs we catch it and hold the perpetrators accountable.” She also urged Trump supporters to “stop spreading lies” about the election results.

After Election Day last year, Rendon filed a resolution to impeach Democratic Gov. Gretchen Whitmer, claiming she exceeded her emergency Covid powers, and signed on to a lawsuit seeking to overturn election results, claiming Dominion voting machines were rigged against Trump. Both of those efforts were baseless and went on to fail. Across the nation, Trump supporters continually latched onto litigation following his loss, in the hope that courts would overturn the election results. But judges, many of whom were Trump appointees, repeatedly threw out the suits. With a lack of any significant evidence to back up the fraud claims in the lawsuits, Trump-backing 2020 election conspiracy theorists shifted their focus to large-scale, legally questionable audits of the election results. The most notable of these to take place so far happened in Arizona, where more than 2 million Maricopa County ballots were hand-counted over a period of about five months. The audit, carried out by a cybersecurity company whose CEO is known for pushing conspiracy theories, was completed last month. It concluded that Biden won Arizona by an even wider margin than the official results, which the audit has no impact on. The effort cost Trump supporters nearly $6 million.

In Arizona’s Bizarre Election Audit, Ballots Are Being Checked For Bamboo And Election Chief Has Been Assigned Protection (Forbes)