No Joke: David Hasselhoff May Actually Be Cool Now As He Attempts To Boost The Lagging German Vaccine Rollout 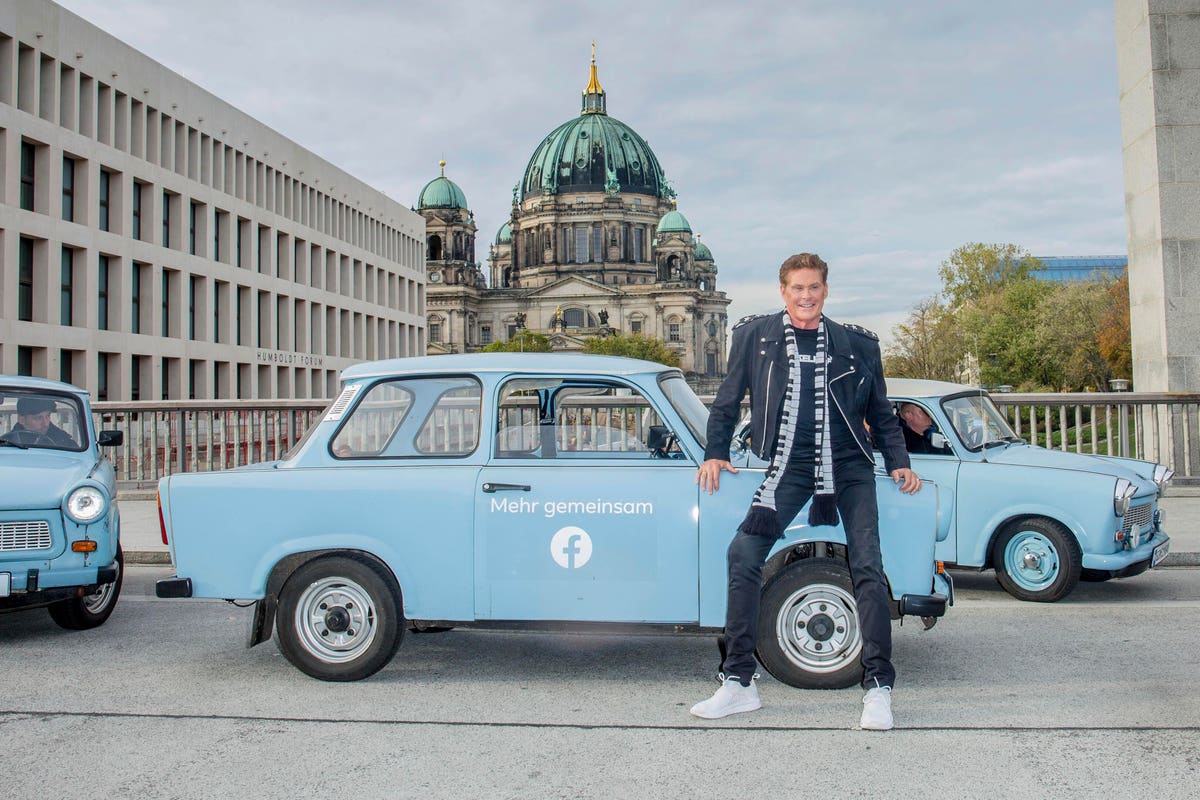 David Hasselhoff is a fun dude, sort of. Tall, clean cut, still holding it together physically, he also enjoys a kind of immense retro-popularity in Germany for having belted out the 1970s Schlager-like anthem “Looking For Freedom” — a single from his ‘89 album of the same name — at the Berlin Wall while standing in the bucket of a crane six weeks after the Wall had fallen, on New Year’s Eve, 1989. There are still grainy videos of that performance being viewed many thousands of times — in the shot above, taken around the 30th anniversary of the fall of the Wall in 2019, the Hoff recreates the concert look while dwarfing the signature East German Trabants, the models in which the East Germans fled their crumbling country in when they mass-evacuated to Hungary and Austria in the summer of ‘89.

It has helped Hasselhoff over the last three decades that the tabloid editors in Berlin, Munich and Cologne keep fanning the flames of his fan base, which is getting on, as he is. At any rate that, and his ur-German family name clinched the deal: Come hell or high water, the Hoff would be popular in Germany, basically, forever.

The question is, how to play that? Tons of American celebrities enjoy strange or at least somewhat unlikely status for all sorts of reasons in Europe — some of them even bank hard on it, as Brad Pitt is doing with his extremely evocative, extremely expensive ads for the Italian espresso-machine maker DeLonghi, now running in pretty much every country in Europe that likes coffee, which is to say, all of them, including the microscopic TV markets of Slovakia and the Czech Republic. Pitt has watched his pal, unofficial Hollywood board chair George Clooney, as he married a European and has become a coffee mogul in his own right, make much hay with an extremely remunerative contract (and board seat) from Nestle.

But while the Hoff may pose now and again astride a big roaring motorcycle, as Pitt does in his tawny-hued coffee sequence filmed in Los Angeles, he’s not really a reflective, boy-model-coffee sorta dude. So it was a perfectly, quirkily Hoff-like occurence when the German public health establishment — an excellent, august, well-meaning entity, if decidedly not renowned for its hipness — took a notion to reach out to the Hoff this past summer to give the whole German SARS-CoV-2 vaccination program a boost.

To be fair, the Hoff’s popularity in Deutschland does roll on rather locomotive-like, no matter what anybody does or what he says, so in that sense the choice of the man as a spokesmodel, so to speak, is genius. And, as William Shatner’s advocacy of any number of causes has been for the last forty years, Hasselhoff’s latest turn is even helped along by being a bit tongue-in-cheek.

The joke in the first video, launched this summer to an almost immediate spike of some 200,000 hits in the first 48 hours, was a gentle one that referenced his 1989 recording and its performance in Berlin. Filmed in Los Angeles with a sun-kissed stone mansion behind him and a lovely palm over his left shoulder, the Hoff leans into the camera, rolls the right sleeve of his regulation crew-neck tee up to show off a post-innoculation bandage on his right bicep.

“Ärmel hoch!” he barks in German, “sleeves up!”

"I, David Hasselhoff,” he pontificates in English with a winning, Shatner-like self-deprecation, “am supposedly a hero because of 'Baywatch' and 'Knight Rider,' and the Berlin Wall. But I found freedom with vaccination. You can too!"

In all, a fun thing, whose takeaway is this: Although Mr. Pitt does his fair share of good works, one doesn’t absolutely have to be THAT cool on a motorcycle flogging coffee. Sometimes, it’s quite fine enough to be David Hasselhoff urging Europeans in a country where he is popular to go get the jab.